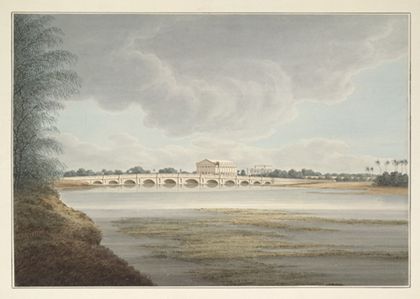 Inventing the Urban River: The Case of the Cooum in Madras City

Abstract: A common refrain in the city of Chennai (earlier Madras), writes Krupa Ge, was to refer to the Cooum River, one of the city’s three main supposedly flowing water bodies, as anything but a ‘water body that gushes forth with mirth to the sea’. Rather, the Cooum is known most commonly for its assault on the city’s olfactory senses. Located on the southeastern coast of India bordering the Bay of Bengal, the city of Madras, one of the first British outposts in the sub-continent, is composed of multiple watery spaces including tanks (eri and kulam), marshes, and rivers. The Cooum, this paper shows, was central to the making of the city of Chennai, formerly Madras, particularly its bridges, drainage systems, and neighborhoods. The Cooum’s history is inextricable from the wider socio-ecological inequity that the city fostered. Its seasonal rhythms and interactions with the wider hydrology of Chennai actively built unequal access to clean air and water into the city’s infrastructure. City and river, urban and wet nature, waste and hygiene, sewage and water re-made each other as waterbody and city cultivated particular epistemic solutions to the problems posed by wet nature. The ‘problem’ of the Cooum encompassed public health, its relationship to the sea, the rains, low-income neighbourhoods, animals who lived in and around it, and finally the image of the city itself.

Often contemporary accounts of the Cooum present it as a flowing water body, ruined by the tenets of modernity. In contrast, this paper argues that the Cooum was invented as an ‘urban river’. If the Cooum was not an ancient free flowing fresh water river ruined by dams, then on what terms might we account for its history? Using maps, paintings and archives, this paper shows that colonial hydro engineering sought to fundamentally transform the the urban landscape of seasonal water that included brackish water pools made by the mixture of saline and freshwater, low lying ground, silt and moving sandbanks. What is further clear is that colonial hydro engineering through this refitting also substantially innovated urban hydrology. Colonial engineers created a new relationship between the coast, the city and the sea through the reengineering of the Cooum.

Take a look at the CHSTM Research Seminar Programme