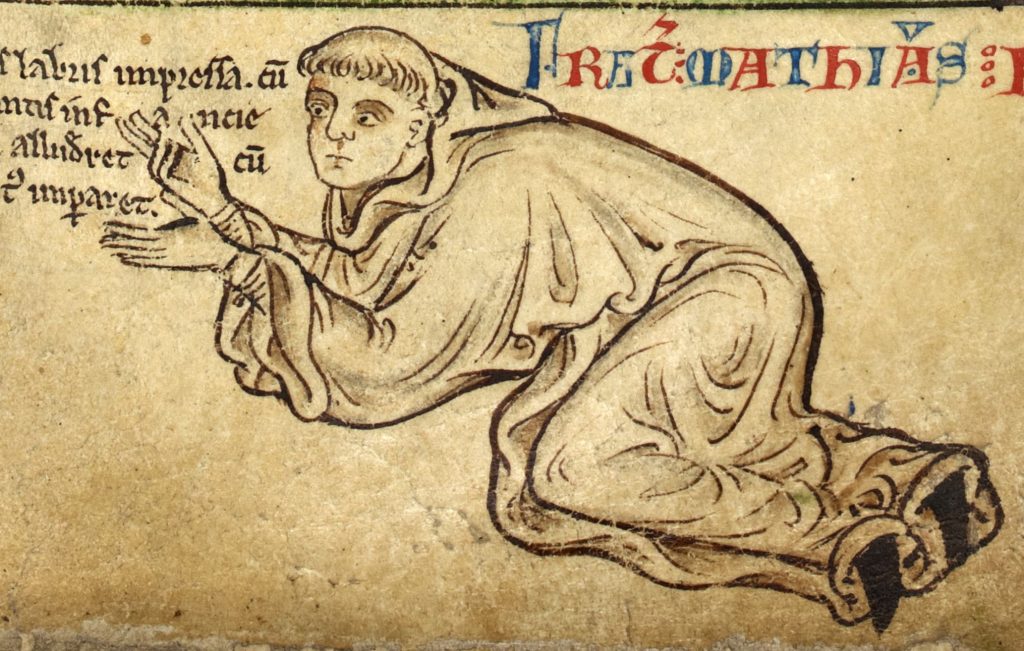 My PhD project focuses on the medieval mystery plays of the York and Chester cycles, and those housed in the Towneley manuscript written by the putatively titled ‘Wakefield Master’. Briefly, the overall aim of the project is to conduct an innovative investigation of the plays in order to interrogate how they can function as transtemporal texts which offer specific modes of regional belonging that exist uneasily, but productively, in relation to other models of unity such as Christianity or theories of nationhood both medieval and modern. One of the concepts that I have recently been exploring is the notion that the plays offer a dialogue of dialects that registers differences which resist medieval and modern universalisms. To this end, re-visiting the manuscripts and their transcriptions has proved surprisingly fruitful.

I say surprisingly because, especially in the case of the York plays, the manuscript (or, more accurately, register) represents a text which was continually checked, corrected, and annotated throughout the historic productions of the plays – accuracy was of vital importance. This is a rare example of a medieval text which was continually subjected to scrutiny, and therefore instances of scribal error can, more or less, be discounted. Equally, the York plays are perhaps the most studied of the medieval mystery plays, and one might therefore assume that there is little new insight to be gained from scrutinizing an authoritative transcription which has gone unchallenged for many years. Yet, it is always worth going back ad fontes to double check the transcription. I discovered that a y has been incorrectly transcribed as a ϸ which, in the particular instance in question, and allowing for regional dialect implications, can change the meaning of the word from there to their. This might seem a minor detail, but it is an important one which, in the context of its usage in the play where it occurs, can move meaning beyond what has historically been interpreted as an observation of hills that are there, to hills that are theirs – the hills now belong to regional others. I wrote my findings and explanations into a short piece which has been accepted by Notes and Queries, and is due for publication in June of this year.

The local environment (what I define as a typical medieval mix of geography, topography, geology, orthography and dialect) informs much of my research into the plays, and the observation outlined above underpins a central tenet of my research into the plays that deal with the biblical story of Noah and the flood, which is that, especially in the Towneley version of this play, those who occupy the literal high ground of the medieval West Riding of Yorkshire also occupy the moral high ground. Most recently, I have been researching the Towneley version of Mactatio Abel, which I believe combines local dialect with local environmental geology. By reinstating the value of the local and paying closer attention to the potential nuances offered by local dialects, my work challenges received translations of words which have, historically, paid insufficient heed to the indeterminative power of the local. One instance of this which occurs in Mactatio Abel is the translation of the Middle English word coyle as ‘cabbage soup’. I argue that, saying this like a local (rather than reading it like a scribe) could actually change the meaning from ‘cabbage soup’ to ‘coal’ – a locally occurring deposit with a rich history in the West Riding of Yorkshire.

Again, going back to the manuscript reveals some tantalizing areas of study. The ink seems to be very thick and almost totally black throughout the early plays (of which Mactatio Abel is one), and the folios are dirty, smudgy and smeared, as though there has been some migration of manuscript ink to body of scribe, and vice versa. Intriguingly, I have come across black ink recipes which use coal dust, soot, and charcoal – some of these recipes coming from household accounts originating from the same geographical area as the Towneley plays themselves. Although this manuscript is not fully digitized, the librarian under whose custody it lies in the Huntington library has been extremely enthusiastic about my research and has suggested that I should apply for a Huntington scholarship to examine the manuscript in person. No ink analysis has yet been performed on this manuscript and, in consultation with the team at the John Rylands Research Institute, I am in the process of collating information on emerging non-invasive technologies which can offer detailed information on the specific carbon content of the ink used in this manuscript which could potentially have important ramifications for my research on the use of coal in this and others of the Towneley plays. Either way, this type of work has not yet been conducted on the manuscript, so whatever the findings reveal, the analysis will be of interest to scholars not only of medieval drama, but to those of social history, digital humanities, and many more fields. So, the future looks exciting and, indeed, positively medieval!