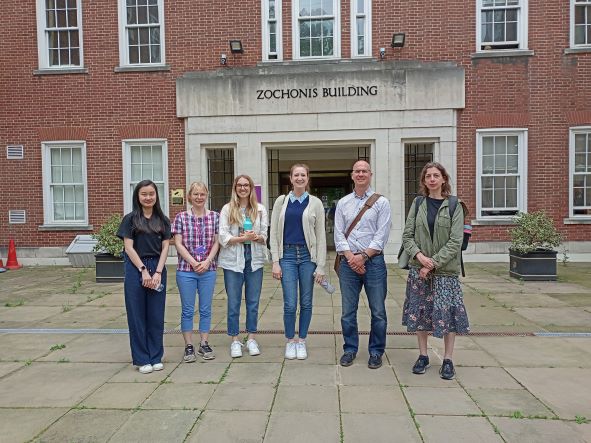 In July 22, Professor Tim Welsh, Dr April Karlinsky and Molly Brillinger from the University of Toronto came for a 2 day visit to the BEAM lab. The visit was part of a collaborative project funded by The Universities of Manchester and Toronto exploring the interactive mechanisms of action execution, perception, and imagination in autistic and non-autistic populations.

Masters of Perception… A two day talk with the University of Toronto on mirrors, music and motor systems.

Picture this – Your friend asks you to pass them a glass of water that’s sat in front of you. You dutifully comply and pass it over and they take it. But what’s actually just happened? The glass has moved from one person to another without anyone saying a word and in a matter of seconds. How do the two arms ‘know’ where to meet? And when? Would you ask a toddler to do this?

These questions are the basis of recent work by Professor Timothy Welsh and Dr April Karlinksy from the University of Toronto on the subject of action co-representation, i.e the way that observing an action from another person activates a representation of that action within the observer which enables understanding, learning and co-ordination between the two. This conjecture is backed up by an experiment involving a simple pointing task. Participants had to observe people moving their finger between two points of varying size and distance and at different (possible or impossible) speeds. They then had to indicate whether or not they could perform the same task at that particular speed, and then execute it. The researchers found similarities in the plots, so that whether you thought the speed was possible depended on your own ability to carry out the action at that speed.

Some of the key ideas involved in these findings are common coding theory and ideomotor learning. These ideas posit that actions are represented in term of their perceptual consequences. There is a shared internal representation of perception and action, meaning some of the same parts of the brain are activated when perceiving, imagining and actually performing an action. These ideas were discussed further in the talk centered on learning, where you can see the real effects of action co-representation. In an experiment on dyad learning, participants learning a task (eg throwing a ball into a net) by alternating attempts between one person and another learned just as quickly as one person attempting by themselves. This shows that through motor imagery (imagining yourself perform an action), the first person in the situation provides a ‘learning model’ for the second from which they can both benefit and improve. For example, if the first person’s aim was wide and the second persons was as well, 57% of participants would correct for both players in their next attempt. Interestingly, this also works with one person learning off their reflection to simulate a second player, which is what happens when you see ballerinas and martial artists practicing in front of a mirror. You can now get software that emulates this by playing back your best attempts so that you become their own ‘expert’ in a sense.

A lot of these ideas sound pretty complicated but there are many useful resources online. One is Dr Tim’s twitter bio, which consists of the simple but elegant summation ‘I move, therefore I think.’*

*moveo ergo cogito, in case anyone was thinking of getting a tattoo

These talks being situated at the BEAM lab, we had plenty of scope to look at the implications of this research for autistic people as well as PWP (people with Parkinson’s). Autism is a neurocognitive condition characterised by difficulties with social skills, communication and interaction. However, it’s commonly understood that cognitive and motor issues can also come with the condition, making it very relevant to the work mentioned here and investigated in another of Professor Tim’s experiments. The participants had to respond to a movement made by the other player and whatever it was they were moving, first with complete vision of the other player and then with limited vision. The researchers found that the performance of the neurotypical players decreased with limited vision, but that of autistic participants remained about the same, showing that these players weren’t actually paying that much attention to the other players’ bodies. This is in line with current research on autistic behaviour by the BEAM lab which posits goal-orientated over action-orientated perception.

PhD researcher Ying Bai then gave a presentation describing results of an experiment that is a collaboration between Tim, April and Molly from The University of Toronto and Ellen, Emma and Ying from the University of Manchester. Autistic and non-autistic participants were asked to perform the same pointing task described earlier where they had to execute the actions then imagine performing the actions. They also had to watch the actions and indicate whether it was possible for them to execute the action at that speed. Results are still being analysed but appear to show similar ability to imagine performing actions for both autistic and non-autistic participants.

So far, so sciency. But it seems there’s scope for arts to help people with these issues as well, according to ongoing work by Dr Ellen Poliakoff on the use of music in the daily lives of people with Parkinson’s – a degenerative disease which affects motor control. Inspired by a case where a pianist continues to play virtuosically despite visible symptoms in daily life, the team set out to try and understand the effects of music on PWP and ways it could be used in treatment – in collaboration with the Royal Northern College of Music, Exeter University and Lucerne University of Applied Sciences and Arts in Switzerland. They first collected data on peoples’ musical and motor imagery capacities (‘How vividly can you imagine the tune Happy Birthday played on a trumpet?’ ‘How vividly can you imagine a dance move before you do it?’) They then looked at other areas like musical sophistication (as defined by Goldsmiths Sophistication Index), music that people most enjoy, and whether they use this to help with daily movements such as getting out of bed or washing up. They found that only 20% of participants used music-invoked motor imagery to help them with movements throughout the day, even though this ability was present somewhat at all disease stages (regardless of musical level) and despite everyone who was surveyed enjoying music. This opens doors to new treatments and ever-growing music and arts therapy techniques for people with motor conditions. The project was complemented by a lovely show ‘Playlist for Parkinson’s’ at the RNCM featuring some speakers from the university and the aforementioned pianist!

Perception can be tricky, and this was playfully explored by scientist-artist Dr Anthony Hall in a workshop co-designed by the BEAM lab on motor imagery and processing. The session started with a ‘spontaneous sensations’ free-draw to warm our brains up and think about what our hands were feeling, which ended up displaying some difference in proprioception between autistic and 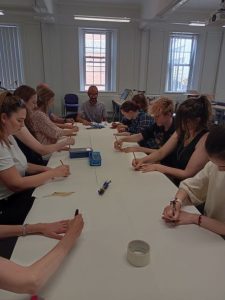 non-autistic members of the group (for me it felt like parts of my hands had disappeared entirely) (see photos). There were also a couple of different variations on the rubber hand illusion, all designed to disorientate and to demonstrate the dominance of vision in the perception process. Finally there was a ‘self-seeing’ station consisting of a fixed 360 degree camera connected to a VR headset, which meant that you could walk around and see yourself at the same time. This one actually wasn’t as bad as I expected – you basically had to look to the side of people every time you talked to them, which as someone who struggles with eye contact is something that I do all the time anyway… As well as being engaging for the regular visitors (the workshop has been ran at Manchester University and Manchester Art Gallery), it also has benefits for autism and Parkinson’s research as it can give insight into sensorimotor processing in these conditions.

The theme of everything in the above workshop is ‘the uncanny’ – a well-known concept in psychology about creating things that seem strangely familiar. Since there’s nothing more familiar than yourself, mirrors seem the perfect way to explore this idea, and the second workshop saw us lined up in a row, in darkness, each with a mirror in front of us and a flickering candle at the back. A take on Caputo’s ‘mirror gaze experiment’ from 2010, it invokes the ‘strange face illusion’ whereby people see faces of monsters or anim 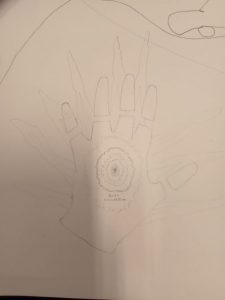 als in place of their own as their brain tries to fill in the gaps in information. Some people from the group reported seeing relatives and friends, and it was clear how in the past distortions of perception like this could end up mixed up in occultist culture or mystical theories. I think we were all quite glad when the lights turned on again at the end…

After two enlightening (and somewhat bizarre) days, the visit concluded with the team going out for food and drinks and apparently having a great chat about autonomous vs automatic movement (in Ying’s words: the first one requires cognition while the second is where you act like a robot.) Sadly, I wasn’t here for this. I was sat at home trying to figure out if my fingers were still attached…