Sexual violence in the aftermath of disaster

This blog was written by Abby Cowperthwaite, first-year BSc International Disaster Management and Humanitarian Response student at the Humanitarian and Conflict Response Institute (HCRI). The blog was part of an assessment for the Introduction to Disaster Management module. Abby received one of the highest marks in her cohort, and so we are featuring her blog here. The blog highlights the short and long-term impacts of a disaster toward women in internally displaced persons’ (IDP) camps following the 2010 Haiti Earthquake.

Trigger warning: this blog contains references to sexual violence throughout.

The Caribbean island of Haiti was hit with a 7.0 magnitude earthquake on 12th January 2010, specifically its capital Port au Prince (de Ville de Goyet et al., 2012), resulting in extensive short and long-term impacts. Gender can determine a person’s vulnerability to the impacts of disasters which presents itself in sexual violence towards women in IDP camps (Duramy, 2012). This blog will explore sexual violence as an impact of long-term displacement to show how disaster exacerbates and highlights gender inequality, with women being left the most vulnerable.

Sexual violence increased due to inadequate security and prevention of gender-based violence in IDP camps. This is highlighted by the testimony below.

“My daughter was raped and so I sent her to the provinces. Four men raped her… She is 13 years old…At Place Mausolée, there is no security at all.”

Camps were overcrowded with a lack of privacy and lighting (Duramy, 2012).  Unlike the home, tents are not secure, and a loss of family structure and support meant that women would have felt a constant threat of attack. Police also frequently turned down women who approached them about an incident (Amnesty International, 2011); thus, gender inequality is institutionalised, causing the problem to persist. Further, little treatment was available due to the collapse of hospitals (de Ville de Goyet et al., 2012), and a poor provision of women’s sexual health services (Human Rights Watch, 2011) highlighted the lack of consideration for gendered impacts. 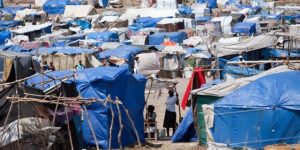 Six years after the earthquake, approximately 62,600 people remained in camps (UN, 2016) as displacement became long-term. With sexual violence continuing and a lack of healthcare, female rape victims would be vulnerable to unwanted pregnancy, sexually transmitted diseases and maternal and infant mortality (Amnesty International, 2011), all of which have long-term consequences. Psychological impacts would likely arise from women’s experiences, such as post-traumatic stress disorder. Rape victims, for example, were found to have suffered from the condition five years after the earthquake (Rahill et al. 2015).

The International Community and Haitian Government were criticised for ignoring gendered impacts of disaster (Alam et al., 2016). Gender inequality is shown to be institutionalised due to Haiti’s inadequate justice-system. It should be the focus of reforms to prevent violence against women. Grassroots organisations such as The Commission of Women Victims for Victims (KOFAVIV) work with the Haitian Government to reach justice for the women affected (Philips, 2015). Despite this, efforts may be seen as reactive rather than preventative. Policies that prevent violence are therefore needed to dismantle gender inequality and empower women vulnerable to long-term IDP camps and a continuation of sexual violence.

Workshop: Social Change from below and above, 21-22 May 2015
Dissertation reflection: counterfeit drugs in Thailand
Student Spotlight: Richard Rohleder