Anti-Asian racism in America during the novel COVID-19 pandemic

The blog highlights the short and long-term impacts of anti-Asian racism toward East Asian people in the US since the COVID-19 pandemic.

Originating in Wuhan, China, the ongoing COVID-19 pandemic has been one of the deadliest diseases to ever face the world, with a global death toll of over 2.71 million. While the origins of the virus have been the cause for prejudice against East Asian and particularly people of Chinese decent in America, it could also be argued that this sentiment represents a deeper anti-Asian history that is exacerbated by certain political figures today.

History of anti-East-Asian racism in America

The 1882 Chinese exclusion act barred Chinese people from entering America. This was a result of increased anti-Chinese hatred in the years prior due to an influx of Chinese immigration (Wu,2021). Half a century later, Imperial Japan attacked Pearl Harbour, which prompted a declaration of war by the US. This led to 120,000 Japanese Americans being incarcerated in internment camps despite prior investigations confirming they were of no threat to America’s national security (Guilford 2018). Perhaps the most relevant event to today’s anti-East Asian sentiment is the 1900 plague outbreak in San Francisco. Doctors wrongly assumed that it was a disease that only affected Asian people, which led to the armed lockdown of Chinatown (Ishak,2020). 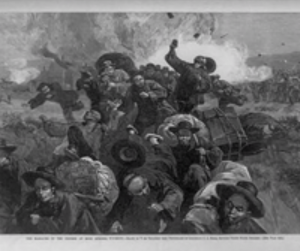 The Rock Springs Massacre, 1885. Where white miners turned on their Chinese co-workers and attacked them resulting in 28 deaths.

Former President Donald Trump’s anti-China stance was comparable to that of America during the mid-19th century. Claims of job losses and economic burden due to the country were central to his campaign. This sentiment of ‘us and them’ and the dehumanisation of the Chinese people was potentially worsened during his presidency when he referred to COVID-19 as the ‘Chinese virus’, which ignited an increase in anti-Asian hatred on Twitter. (Hswen, Xu, Hing, Hawkins, Brownstein and Gee 2021). In 2020, a study conducted by CSUSB shows that while overall hate crimes decreased by 7%, anti-Asian hate crimes increased by 149% (CSUSB, 2020). 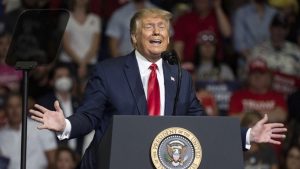 The Former President also referred to the virus as ‘kung flu’.

It is important to note that the effect that racism and hate crimes have on America is largely unquantifiable. The marginal cost of medical bills or policing due to hate crimes and racism would be difficult to calculate. Furthermore, the collective emotional toll on people’s lives would be impossible to quantify, as each person is affected by varying amounts and in different ways. However, Asian-Americans that were affected by racial discrimination due to COVID-19 reported increased anxiety and depression. Young people who had been discriminated against had an increased likelihood of developing chronic mental health problems (Reja,2020). A study also found that those born in the US were affected by their attachment to their ethnic identity against the damaging effects of discrimination. Those in their thirties and fifties felt more distressed if they had a stronger attachment (American Psychological Association 2008).  Helena Beard, the managing director of China Travel Outbound, describes how Chinese travellers might avoid the US when travel restrictions are eased (National Geographic 2021). It is fair to assume that this might be the case for East Asian travellers from all around the globe.

Ishak (2020) ‘How Americans Responded to the Sanfransico Plague of 1900 with Corruption And Racism’, Available at: https://allthatsinteresting.com/san-francisco-plague-1900  (Accessed: 21/03/21)

Why Rubina chose to study online
How development shaped the shrinking of Aral Sea
Happy 12th Birthday HCRI: Celebrating achievements over the past year