This blog is written by Dr Jessica Hawkins, who joined HCRI in 2014 as a Lecturer in Humanitarian Studies. Her teaching centres on histories of humanitarianism, war and conflict with a focus on displacement. Jessica’s current research interests lie in the historical sociology of camp formation. She is also interested in the pedagogy of humanitarianism; examining how we teach difficult subjects related to violence, conflict and displacement. In particular, she is researching the value of student research visits to conflict-affected societies. 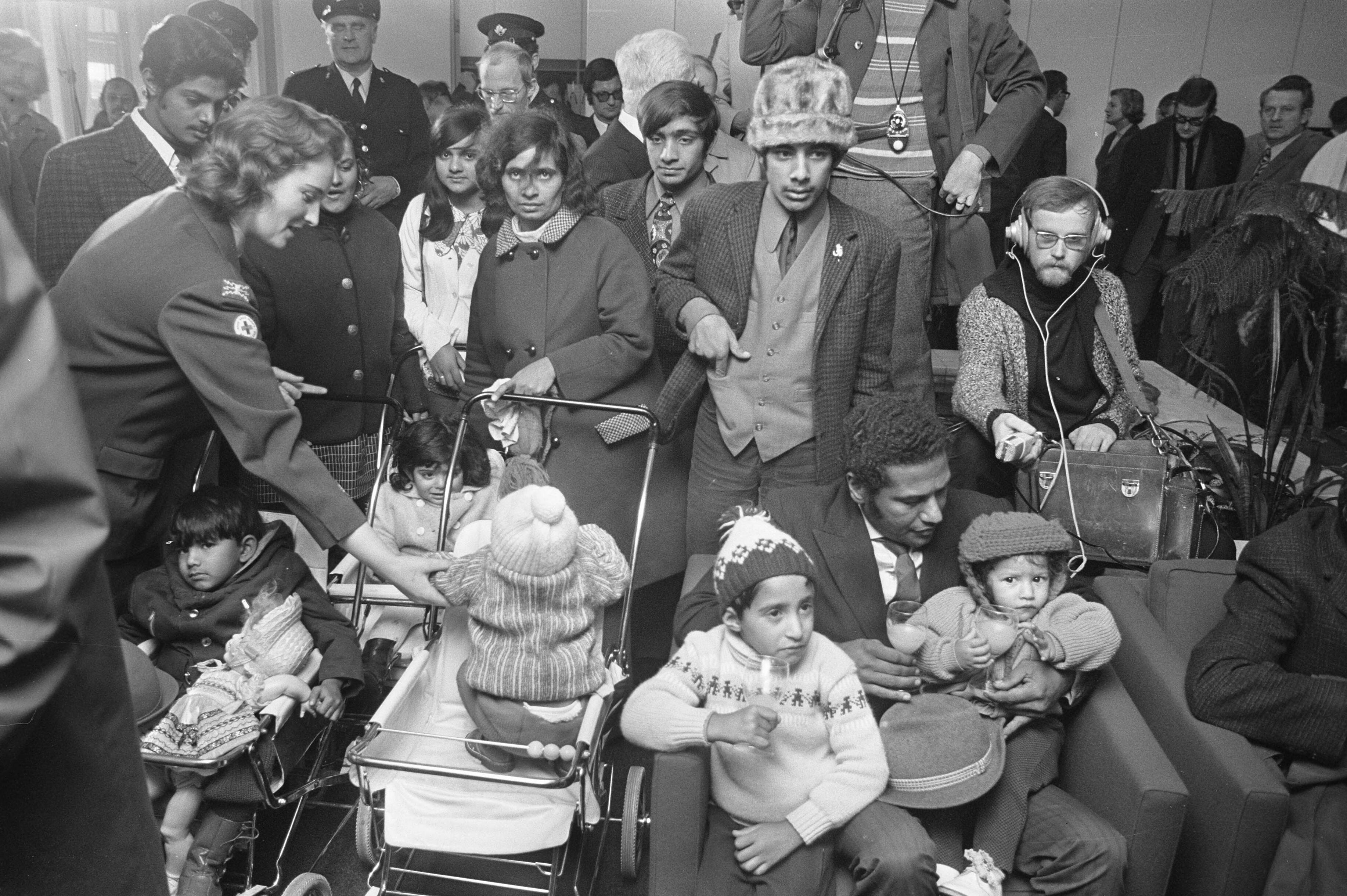 Pictured: Ugandan refugees arriving in The Netherlands in 1972 (The National Archives Catalog)

Fifty years ago, on 4th August 1972, General Idi Amin decreed that Asians in Uganda should leave the country within 90 days. The decree, whilst unexpected, fell within a backdrop of Africanisation of the Ugandan economy since it gained its independence in 1962. Here, I outline the British humanitarian response to a disaster which saw up to 60,000 Ugandan Asians lose their homes, income, businesses and their lives as they knew it. Forced into an uncertain future of becoming refugees, I summarise the nature of their expulsion and consider the British government’s immediate and long-term response to the decree. I then outline the treatment the Ugandan Asians received on arrival in the UK and consider the humanitarian response from the British public to their arrival.

Contrary to popular discourse at the time, many Indians had migrated to East Africa prior to the arrival of the British colonialists. The opportunities for trade, employment and food shortages in India made the African continent a popular pull factor for those with the means to pay for their passage. As Uganda became a British protectorate, further Indians became indentured labourers to build the railway from Mombasa to the interior of Uganda. Discouraged by the colonialists from farming, the Ugandan Asians fell into trade, particularly through establishing dukas, small shops, and acting as the middle-men between the Ugandan cash crop farmers and the export of cotton and later coffee.

By independence, only a small minority had established large wholesale businesses and sugar industry. At the time of his decree Amin declared that Ugandan Asians were milking the cow without feeding it. It was true that they paid less taxes, earned more money and had better skilled jobs than the African Ugandan population, but in reality, the vast amount of money leaving the country stemmed from British-owned banks and former colonial enterprises.

Amin’s economic war aimed to redistribute wealth and property to African Ugandans and expelling the Asian population was a key element of this. However, it became apparent to many Ugandans, especially Amin’s foot soldiers, that the businesses and wealth would be redistributed to those who were close to Amin high up in the government and army. This resulted in looting and pillaging of expellees’ goods, property, and belongings and violence committed in the process by Amin’s foot soldiers on the ground.

At the point of independence, Britain had offered Asian minorities the right to a UK passport. Amin’s decree therefore, meant 50,000 people now had the right to enter the UK. Further, all other Asian-origin Ugandans were told to leave, rendering large numbers stateless.[1] The United Nations provided a temporary refugee camp in Kampala’s Sikh temple before moving the stateless to permanent UN camps in Malta, Spain, Austria and Belgium. For the rest, the arduous process of verifying their right to a British passport began with long, endless queues at the British High Commission.

Within Britain neither Labour nor the ruling Conservative party were vocal in welcoming those who had every right to enter the country. The first month after the decree demonstrated British bureaucracy at its worse, unnecessarily prolonging the process by insisting Ugandan Asians have the right paperwork or more evidence to prove their right to a British passport. In Britain, the 1968 Commonwealth immigration Act and its 1971 amendment had put in place quotas on the number of immigration vouchers issued each year for those who were entitled to British passports from former colonies. In 1972, this quota was 3000. It became evident very quickly that the number from Uganda would far exceed this.

The government attempted to persuade other commonwealth countries and states to accept some of the expellees; Canada received 8000 and between 10-15,000 went to India on the proviso that they could transition to the UK at a later date. However, the Prime Minister, Edward Heath, quickly realised that the UK had to respond, setting up the Ugandan Resettlement Board (URB) on 18th August and receiving the first chartered flight of 193 refugees at Stansted airport just a month later.

The humanitarian response from the British government through the URB focused on three strategies. The first established arrangements to receive the families at airports through reception teams; the second aimed to find the refugees temporary accommodation near to these arrival points, particularly for those who had not organised any prior final destination. For these first two aims, transit camps were established, the first in Stradishall, 50 miles from Stansted. The camps, situated on former military bases or in University halls were dotted throughout the country. Some were close to urban centres, providing easy access to the next step of resettlement, whilst others, such as the camp in Tonfanau in West Wales, isolated the refugees from any networks and employment opportunities. As American researchers put at the time, it quickly became apparent to the URB that transit camps would become resettlement centres as bigger political issues precluded quick resettlement for the Ugandan Asians.[2]

The third strategy aimed to persuade the arrivals to go to areas which were deemed acceptable by the government and local authorities. It was this final strategy which became the most controversial in the response to the refugees. The URB established red and green areas of the UK which dictated where the refugees should resettle. According to the URB, an area received a red classification if it was experiencing difficulties in two of four criteria (housing, schools, social services and employment) and the refugees were encouraged instead to opt for green areas which had less issues in these criteria. In reality though, it was apparent that red areas were those which already had a high concentration of commonwealth immigrants. Leicester City Council, a designated red area, placed a half-page notification in a Kampala newspaper declaring: “In the interest of yourself and your family, you should accept the advice of the Uganda Resettlement board and not come to Leicester”.[3]

It was clear that Britain at the time was experiencing a profound housing shortage in both red and green areas. The transit camps were becoming long-term due to the fact that very few homes were being made available to families. The URB ignored the fact that those areas which were classified as red, were actually the majority of areas where Ugandan Asians had social networks, making it easier for them to transition to life and work in British society. The shortage of housing was creating long waits for families even in green areas; the better option was to move to red areas where they could rely on friends and family to support them. The arrival of the Ugandan Asians highlighted beyond the inner circles of government, the housing crisis that had already existed for many in the UK, and created the catalyst for a public response.

The expulsion of the Ugandan Asians happened at the end of the “long sixties”, which one scholar notes saw the ascendency of community activism, especially against racism, juxtaposed with increased antagonism against immigrants from former colonies.[4] The government was keen to present the Ugandan Asians as being different to earlier immigrants, first, they were refugees, persecuted by a ruthless tyrant. By September, the media supported this view, reporting the atrocities happening in Uganda, emphasising that the only option for Ugandan Asians was to flee. Second, the refugees were portrayed as having “middle-class respectability” with their wealth and education. In truth, most were only permitted to leave the country with £50 in cash, and any wealth or businesses were dispossessed by Amin’s army prior to departure.

These two narratives forged a humanitarian response from some members of the British public. The reception and resettlement centres received volunteers who wanted to demonstrate a positive response to the crisis. Many supported the refugees when they remonstrated about the inadequate facilities, the poor food and living conditions. Two days before the creation of the URB, twenty national volunteer organisations met to form a coordinating committee to not only help with their resettlement, but also to promote positivity about the refugees’ arrival. This committee grew to sixty organisations forming the co-ordinating Committee for the Welfare of Evacuees from Uganda.

In addition, by September, 2000 places were offered in private homes to accommodate the refugees, rising to 5000 by the end of the year. In green areas in particular, a public humanitarian response was visible, demonstrating “sympathetic local authorities with an active and generous civil society”.[5] Civilian support was provided to help the Ugandan Asians furnish their homes and navigate the often complex infrastructures of local bureaucracy, such as registering for a doctor or school. However, such positive responses belie the struggles many Ugandan Asians faced as they set about starting a new life. Racism both at home and in the employment sector, a lack of support for non-English speakers (especially women) and low-wages resulted in a long uphill struggle for many before they considered themselves “settled”.

The expulsion of the Ugandan Asians in 1972 demonstrates a humanitarian response by the British government and public on a scale never seen since. It is only perhaps with the recent Ukraine crisis that co-ordination on a similar level has emerged. Although fairly receptive, and definitely not hostile, the British government and URB in particular, response was slow. The strategies did not address the needs of the Ugandan Asians to not only recover from a traumatic expulsion but also a desire to settle with social networks. The humanitarian response from the British volunteers showed solidarity and compassion. However, it is the resilience of the refugees themselves, a narrative often missing from the historical accounts, which deserves highlighting.

Interview with Dr Rony Brauman, HCRI Director
New economic geographies and old conflict dynamics: trade in the border region of India, Pakistan an...
Decision-making at a time of great uncertainty