Women’s History Month 2021: Women after the Bolshevik Revolution: Equality and Independence? A brief introduction to the role of Women in the early Soviet Union.

In honour of Women’s History Month, I wanted to talk about gender equality and the role of women in the Soviet Union in the 1920s and 30s. This topic was instrumental in shaping my journey as a researcher; I first became fascinated with questions about family and gender in the Soviet Union during my undergraduate degree. The wonder I experienced in discovering a rich historiography that illustrates the complexities of women’s lives and place in society in the Soviet Union and the fascinating work being done in this area by formidable scholars, most of whom are women, inspired me to pursue a PhD on the history of humanitarianism at HCRI.

In this blog, as well as reflecting on the absence of women’s voices in history, I want to encourage us to recognise the importance of histories of the everyday. For a long time, history was mostly written by and about men. It focused on ‘great men’ and their military and diplomatic feats. In these histories, the role of women in times of conflict was often disregarded as less important, and at best, they would feature as passive victims. This can also be seen in the way recipients of humanitarian aid have traditionally been portrayed.

As there has been a methodological shift towards social and cultural history, new approaches have allowed scholars to explore different perspectives and experiences. My PhD project tries to do this by considering the Kazakh Famine of 1930-33 through the lens of humanitarianism, and by considering domestic responses to the crisis, hopes to include the voices of local actors. However, as an example from my own work will show, more needs to be done to make heard the voices of politically and culturally marginalized groups.

Women in the Soviet Union

When the Bolsheviks came to power, they set out to create a new political and economic system. Women were active participants in this project, with supposedly equal rights and responsibilities, and had already been granted the right to vote by the Provisional Government in July 1917 (Ruthchild, 2010). Equality was extended and enshrined in law by Article 122 of the Soviet Constitution, which accorded women ‘equal rights with men in all spheres of economic, state, cultural, social, and political life’ and in the two decades following the Revolution in 1917, women enjoyed considerable freedoms. The Bolshevik government promoted liberal attitudes towards relationships and sought to dismantle the traditional family unit, in time, by creating communal living and childcare arrangements that would allow women to fully partake in the workforce.

Alexandra Kollontai, Russian revolutionary, radical feminist and Soviet Diplomat wrote about the New Soviet Woman in 1918: “Thus does present herself to us: self-discipline instead of emotional rapture, the capacity to value her own freedom and independence rather than impersonal submissiveness, the assertion of her own individuality instead of the naive effort to internalize and reflect the alien image of the “beloved.” … Before us no longer stands the “wifie,” the shadow of the husband – before us stands the personality, the woman as human being.”

Under Joseph Stalin however, there was a radical departure from this programme in the mid-1930s. In 1936 progressive Bolshevik policies were legally overturned when abortion was made illegal and divorce more difficult. Traditional family values were once more promoted, childbirth and motherhood were encouraged by extensive propaganda campaigns and rewards, such as medals, medals for ‘mother heroes’. Official discourse tried to maintain the illusion of equality. This neo-conservatism was presented in revolutionary terms – giving women their own role in the revolution by allowing them to contribute to ‘building socialism’ in the way they are best suited to (Kirschenbaum, 2000). 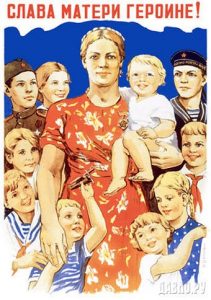 Propaganda poster about a woman’s duty to her children, http://blogs.bu.edu/guidedhistory/russia-and-its-empires/chelsea-adler/ [accessed Tuesday 30.3.21].

However, this does not mean women retreated into the home. As ‘Wives Activists’ (obshchestvennitsa) they lobbied to improve working conditions, volunteered in nurseries and cafeterias and organised social and educational events such as book clubs, actively promoting the values of socialism (Balmas Neary, 1999). Women were also still actively encouraged into the workforce and fought in WW2. However, they did not enjoy the same level of support and admiration as their male counterparts (Fitzpatrick, 1999). Thus, women in the Soviet Union faced the ‘double burden’ of being ‘an exemplary performer both at work and at home, and to embody the different and often contradictory qualities and traits which were supposedly appropriate to each of these spheres.’ (Attwood, 2001: 158). 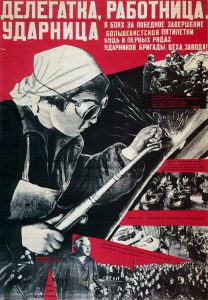 In Soviet Central Asia, the area my research focuses on, people had a very different experience of Soviet power. Russian elites considered the region backward in economic, social and cultural terms. Ideas of civilizational difference and ‘otherness’ established in the imperial period to justify the imposition of Western values and practices that would supposedly bring progress and civilisation, continued to shape perceptions of Central Asia after the Revolution (Michaels, 2003).

This belief manifested for example in intense anti-religious campaigns, that sought to challenge the control of traditional (religious and native) authorities and consolidate Soviet rule in the region. A visible example of this was the hujum, the campaign for gender equality in Soviet Central Asia, which was primarily associated with the unveiling of Muslim women (Kamp, 2006; Keller, 1992). Bolshevik policies would liberate women by abolishing practices associated with Islam, such as polygyny, bride prices and most notably the veil, which were seen as symbols of oppression and backwardness by Soviet rulers (Keller, 1998; Michaels, 2003). Thus, several of the sovietisation campaigns in this region focused on women, who were seen by the Soviet leadership as the most likely agents of progress as they had much to gain from emancipation.[1] Another example of this is the prioritisation of healthcare services for women and children in Kazakhstan from 1928 onwards. Here, ‘Red Yurts’ combined public health and outreach, providing not only medical services but education on hygiene and health for women and children. Paula Michaels argues that while this was framed in terms of economic and social progress, the leadership also hoped visible improvements in women’s everyday lives would inspire gratitude and confer legitimacy on Soviet rule (Michaels, 2003).

[1] Gregory Massell (1974) was the first to advance the notion that women in Central Asia, an area where industry was underdeveloped, were viewed by the Soviet government as a ‘surrogate proletariat’. 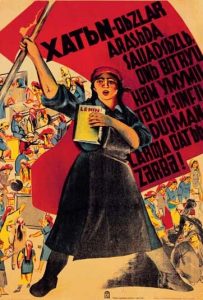 While much has been written about the important role of women in Soviet Central Asia, it is rare we hear their stories told through their own voices. In large part this is due to the availability of sources produced by minority groups, who have been purposefully excluded from the conversation by groups in power, a challenge I have experienced in my own research. In the context of Kazakhstan, a large part of the population led nomadic lifestyles when Soviet rule was established and shared their history through strong oral traditions rather than in writing (Kindler, 2014). The documents stored in archives were often produced by and for the Soviet bureaucracy. As a result, they tend to be in Russian, a language which many ethnic Kazakhs did not speak by the early 1930s and therefore do not reflect the experiences of those most affected by the famine. Recognising the importance of hearing the stories of people whose voices have historically been neglected is critical to understanding the lived experiences of all women and peoples under Soviet rule. In line with this, historians of Soviet Central Asia are constantly trying to find new ways to creatively use existing sources and scholars in this area have done fantastic oral history research, which has allowed them to include the perspectives of ordinary people who lives through an extraordinary period of history.

The manufacturing of death by EU asylum and migration politics
Care vs Control: the need for greater support for Home Office asylum caseworkers
Making the impossible possible? A brief look at one busy bee full-time professional trying to prove ...